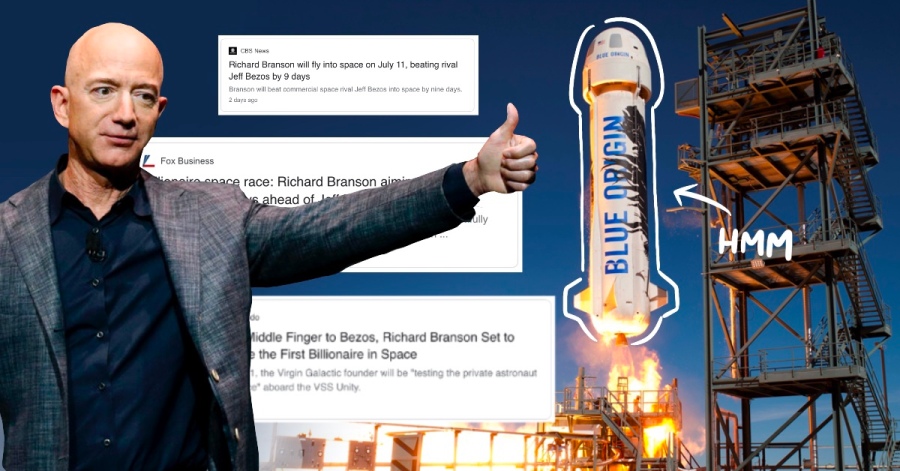 On July 20th, Jeffrey Preston Bezos will be boarding a rocket and heading off in a quaint little outing to outer space. The poetic bitterness of the rich very literally boarding a spacecraft to get off the planet while the ocean burns is not lost on me, at all.

But on the bright side, for that brief period while Bezos hurtles out of the stratosphere on a harnessed nuclear bomb at twenty-thousand miles per hour, he will not be the richest man on the planet. (Short of time travel and/or violent actions, this is the only chance we have to experience such a break.)

(For legal reasons, this entire blog site, including all of its literal content and figurative implications, consists of pure satire. I, Quinn, wish no bodily harm nor violent actions upon any billionaire CEOs. That would be outrageous and morally indecent. For legal reasons again, my Twitter is also completely satirical.)

Bezos claims that to explore outer space has long been a dream of his, and you know what, Jeffrey? I totally get it. We all have our dreams. Yours might pertain to space travel and retirement, while mine consist of space travel (Look at that! Something in common!), performing stand-up comedy at least once, and the slow dismantling of capitalism and the patriarchy.

While the dissatisfaction behind my sentiments extend to a few quippy lines in a blog post and perhaps some scathing tweets, some people who share similar dreams have taken it a step further. On the website change.org, Internet user Ric G.—who I have not met but who I would pledge my loyalty to should the revolution ever come—has started a petition to gain the support of all those who agree that Bezos should definitely make his journey into space, on the given condition that he stay there.

Ric G.’s petition to the proletariat to campaign for Bezos’ permanent residence in outer space, on change.org.

“Billionaires should not exist…” Ric G. writes in their petition ‘Do not allow Jeff Bezos to return to Earth’, “on earth, or in space, but should they decide the latter, they should stay there.”

The petition has been linked for professional journalism citation reasons, and definitely not because I sincerely urge all of you to sign it. Right now. It’s right there. You shouldn’t sign it, right here, right now, even though it only takes a minute, since it’ll be a futile action anyway…

But seriously, wouldn’t it be funny, though? The idea of Bezos preparing to re-enter orbit but being blocked by some omniscient, all-powerful Earth Council that goes, “Eeeh… Democracy says no.”

Confused? Don’t worry. You’ll get used to it. But I’ll bring you up to speed anyway.

Wally Funk, an 82-year-old astronaut, will be accompanying Jeffrey Preston Bezos into space on July 20th. Back in the 1960s, Funk was one of the astronauts who passed NASA’s training program for Mercury 13, but she was ultimately denied passage into space alongside her fellow female astronauts due to their gender.

Wally Funk in all her glory back in the 60s. (Via engadget.com)

I didn’t think I’d ever get to go up.

Now, listen. This is actually pretty awesome. Alright, this is rad. My eyes got a little teary while watching the official announcement video they posted, and I would like to wish Wally Funk, the icon that she is, the best goddamn flight ever. Because god knows she absolutely deserves this moment, a thousand times over.

But simultaneously, screw Jeffrey Preston Bezos for humanizing this operation. Now we can’t look at this space trip as simply the start to the privatization of space travel, a blatant exploration for a field of profit. Because now there’s Wally Funk, with her genuine smile and infectious excitement, and who can be mad at that, at her?

It’s like Bezos is playing a magic trick on us. His right hand is bedecked with a colorful glove and glitter, waving in the air tantalizing— “Look at this,” he’s saying. “Over here! Look at how pretty that is, are you watching?” —while his other hand, behind his back, plots to take over the means of intergalactic expansion.

But short of becoming a stowaway on the Blue Origin ship, sneaking up on Bezos once they officially exit orbit, shoving him into an airlock—all the while ensuring Wally Funk witnesses none of this—and forcibly ejecting him from the ship, there’s nothing much we can do about this.

However, Bezos and Funk are not alone in achieving their dreams. Sir Richard Charles Nicholas Branson, which is a name only a Bond villain would have, is planning on going into space on July 11th, beating Bezos to the punch.

Now, while Branson claims it doesn’t really matter whether or not he beats Bezos, I can’t pass up this opportunity to compare this obscene show of wealth and one-upping each other to the Space Race of the 1950s. I’m sure Wally Funk would get it.

Which truly begs the question: If we were to compare this to a modern-day Space Race, obviously without the looming threat of imminent nuclear destruction, who would be America and who would be Russia?

My initial thought was that Jeffrey Preston Bezos, of course, should be America. After all, the man is the encapsulation of all things capitalist and modern. But then I Googled who exactly Richard Branson is, and man, his hair is insane. Someone with hair that free, that untamed and flowing, like the old wild frontiers of the Wild West, should surely be the one to represent America.

Seriously. Look at that hair. Who looks like that in real life? Not even Bond villains have that flair. (Via CNBC)

(Plus, Branson founded the Virgin Group. I don’t care what it actually is, I’m going to take the name at face value and make a low-hanging joke. You hear that, Sir Richard Charles Nicholas Branson, man of a five-billion-dollar net worth? I’m making you and your legacy and your semi-Han-Solo-ish hair into a joke. Me and my excessive use of hyphens. Ha.)

But jokes aside though… We are living in a dystopia, aren’t we?

I feel like we should definitely be more upset over the rich pioneering their way into space as the world burns down behind them. Even the whole “You can win a lottery ticket to board the Blue Origin ship!” thing is ridiculously dystopian—it’s like what you’d think Shirley Jackson’s The Lottery is if you only heard the name and never read the actual story.

So that’s, you know. Fun. Man, I could’ve written a blog post alone on the Gulf of Mexico fire, but who’d want to read that? Digital journalism thrives on sensationalism and entertainment, so here I am.

Hope you enjoyed reading this blog post and going on a wild ride of whatever this fiasco is. The story’s not over yet—not until the rocket launches on July 20th, not until Bezos & co. return to Earth. But until then, all we can do is sit, write blog posts, and pray for an Earth Council to finally assemble.

Join my TinyLetter email list if you’re interested in being the first to know when a blog post goes up, alongside being the recipient of some rad exclusive content! I promise I’ll use it someday, eventually, hopefully. (I swear.)

Thanks for reading! Don’t forget to stay hydrated—it’s getting real hot, nowadays. See you around.

Just follow this link here! Still hammering out this function.