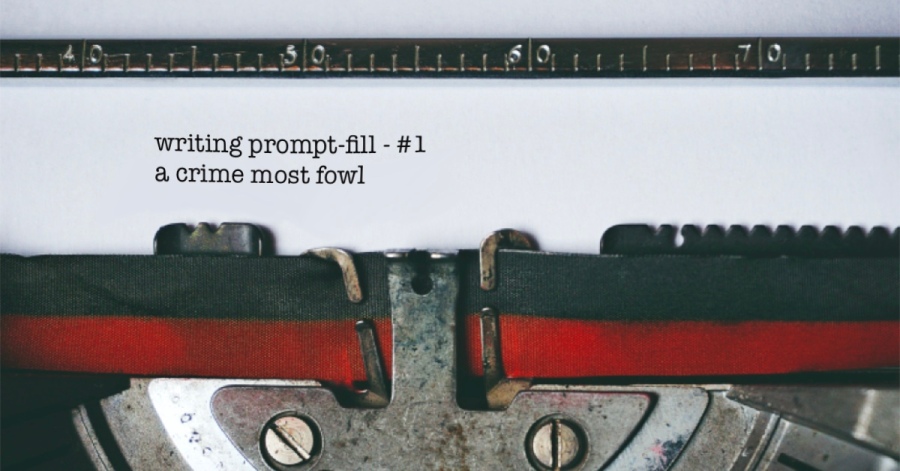 “You’ve spent months training a flock of crows to bring you valuables, cash, etc. in exchange for seeds and other rewards. You only start to question where they’re getting these things when they bring you things like deeds to property, wallets full of cash with no ID, and ancient gold coins.”

I stare at the new item. Around me, the crows flock—a good dozen of them, perhaps, lingering on my porch, all eagerly awaiting my reaction to their newest gift. It is one PM on a Wednesday, and I am not ready to handle this.

“Guys,” I begin, “listen. I love you, but there are boundaries. There are limits. Cash? That’s good. Jewelry? That’s great. The unmarked wallets? A bit weird, but doable. The ancient gold coins that were almost definitely cursed? You know what, still alright.”

They wait. I take a deep breath.

“But this?” I gesture at their new gift. “This crosses a line.”

“Squawk,” a crow says, and I sigh. Years of cooperation and friendship with these peculiar birds have led me to… Well, not exactly understand them, but certainly get the gist of their words.

“I don’t care,” I bite out, “that it’s shiny. Guys, this is a sword. This is the sword. Excalibur. I’m not—I’m not ready to rule England, okay? I—I can barely take care of my own lawn.”

They stare at me. I stare back. I begin to think they aren’t comprehending the gravity of the situation.

Still unable to believe the reality of my situation, I take another good look at the sword. I nod to myself, confirming mentally that the sword is indeed a sword.

But the problem is what sword exactly it is. Of course I know what Excalibur looks like—it’s depicted in all the history books, textbooks, tourist’s guides, maps, tapestries, and souvenir shops one could imagine. Excalibur might be England’s most marketable landmark, right next to the face of Queen Elizabeth and Big Ben.

And the sword that the crows are currently perched next to—it matches the likeness of the famed Excalibur exactly.

From the golden grip, down to the engraved blade, all the way to the prominent, gleaming ruby set into the hilt of the sword, it is an absolute, undebatable match. For one last final confirmation, I run my fingers down the engraved lettering, and it glows—almost imperceptibly—beneath my touch, a golden shimmer tailing my touch.

I thought it was a myth.

The awe overtakes me so entirely, that for a good minute I forget that I’m in possession of what’s not only the most famous and dangerous weapon in all of England, but also what is essentially the lifeblood of the tourism industry.

In other words, it’s as if Big Ben appeared suddenly in my backyard, except it’s shrunken down to the size of a baseball bat, charged with ancient mythical magic, holds the deed to the homes of every single citizen of England, and is also coincidentally decked in hot pink confetti. That’s not a very good approximation of what the situation is, but hopefully it gives you insight on how much I am freaking the fuck out.

I don’t understand how they even got it out of the stone. Of course, any visitors to the Excalibur Stone are welcome to give it a try, but no one’s ever managed to get the stone to budge. It’s become such a hopeless case that people are beginning to wonder if the legend was real in the first place—or it it was all just a hoax to get tourists to visit.

Well. I guess now I know.

“If it wasn’t me who pulled the sword out,” I muse aloud, “and it was you guys… Does that make you sovereign?”

“Okay, ‘whatever’ is not an appropriate response for the occasion,” I reprimand. “Now listen: You lot go put the sword back in the stone, and I’ll give you your bread. The good stuff, this time. I’m talking store-bought in the aisle where they slice and pack it up for you in paper packaging, not just some random toast that I grabbed last minute.”

“Yeah, with pumpkin seeds, too,” I cajole. “Pumpkin seeds and assorted nuts. Guys, seriously, please put it back. Make it fast—I don’t think that’ll be too hard. At least it’s just the one sword, even if that sword is—”

“Squawk,” a third crow interrupts, and I pause.

I take a second, and try not to spontaneously combust out of stress.

“What do you mean,” I say, very slowly, “you also stole the Crown Jewels?”

“Squawk!” a crow exclaims, and its chest puffs out in pride. In pride, and also in acid reflux, as it coughs and splutters and spits out a few wet shining gems.

At least five other crows follow suit, until I am surrounded by the unpleasant smell of crow bile, and the even more unpleasant realization that I am almost now certainly a traitor to the throne.

Rubies, emeralds, sapphires, diamonds, and pearls are scattered on my porch. Precious stones that are very familiar, given my status as a (previously) loyal English citizen.

“They’re saying they have no idea how the Crown Jewels came to be in their possession,” Defence Secretary Wallace Benjamin says into his phone. “No, no, I—I understand it sounds ludicrous, but it’s what they’re sticking by.”

“Well, we checked the security tapes. Every one of them. And the entry record. Who bought tickets, who was on the staff, all of it—checked their whereabouts and identities and all.”

“No. No, they just… they weren’t there. On any of the tapes or records. Actually, they have an ironclad alibi—witnesses say they were at their local coffee shop for most of yesterday.”

“I’m stumped,” Defence Secretary Wallace Benjamin says into the line, and he genuinely sounds like he’s at his wits’ end. “I—truly.”

“Yes, they’re claiming a sentient flock of crows did the crime,” he says, presumably to whoever overheard me through the phone.

“It’s called a murder of crows,” I correct him, once again shouting loudly through the glass. I watch as he goes through all five stages of grief within about three seconds.

You might be wondering how I got myself an audience with Defence Secretary Wallace Benjamin. Well, dear reader, let me fill you in.

After I realized just how deep the shit I was in went, I had just enough time to toss Excalibur into the bushes surrounding my front porch before I heard the police sirens. And I know what you’re thinking—if the police were able to follow the crows to my house, why would they not believe that a murder of crows stole the Jewels? It should be on security footage, right?

The answer is simple: Because humans are small-minded, and petty, and they refuse to believe the truth if it seems bizarre. (And also because they may have caught me in the act of scrambling to collect all the Jewels scattered on my porch, which is—admittedly—very guilty-looking of me.)

The crows fled after the first sound of the sirens, which was very inconsiderate of them. The police took me into custody and drove me straight to the Ministry of Defence, who showed me to my current cozy interrogation room.

And now here we are.

“Well, what do you suggest we do?” Defence Secretary Wallace Benjamin is saying into the phone. “Pardon them? From stealing the Crown Jewels? It doesn’t matter if they didn’t do it—we found them with the Jewels!”

Personally, I think it’s always, always, more about the journey. Yes, I may have ended up with the Crown Jewels of England, taken from the Tower of London and her Royal Majesty herself, but has anyone ever thought about the friends we made along the way?

Before I start thinking logically and realize that the friends I made along the way were what got me into trouble in the first place, Defence Secretary Wallace Benjamin sighs and says, “For this crime? It would take a pardon from the Queen herself.”

“Never,” I say, slowly and clearly, enunciating every syllable, “ever, take anything from the Royal Family ever again.”

The crows stare back at me, their eyes glimmering even in the setting sun. I’m crouched on the front porch, having a serious meeting with the crows as they peck away happily on pumpkin seeds—and the most important thing is that I am back home.

“Squawk,” a crow says petulantly in response to my words.

“Don’t give me that ‘We can’t differentiate’ bullshit,” I retort. “I once saw you guys drag a box out of a lake, pick the lock, and toss it back in after realizing there was nothing good inside. Just—stick to coins? Please? Cash and stuff?”

The crows regard me with judgement.

“Alright, ancient gold coins are good too,” I allow.

The judgement persists. I scatter a few more pumpkin seeds for good measure.

The crows go back to pecking the seeds.

I look over at my bushes, which are half-gone. Wrecked, really, from the urgent combing that the Ministry of Defense had done when I told them that the Sword in the Stone was now actually out of the stone and in my front yard.

I only did two things while being temporary sovereign of England. I know, I know—truly a squandered opportunity. Should I have abused my power more? Maybe. But as I wasn’t sure entirely if I could still be prosecuted for my actions after my reign, I refrained from going absolutely batshit.

My first royal decree was pardoning myself from all crimes, as per expected—a pardon that extended not just to the case of the Crown Jewels and Excalibur, but also to a few parking tickets that I never paid off.

For my second decree, I illegalized all anti-homeless spikes and similar architecture, along with anti-roosting spikes for birds (since I was on that path of thought and all). No accompanying quip or punchline here—I’ve just always really wanted to do that.

Then I transferred power back to Her Majesty, Queen Elizabeth II, who I suppose is the only person in history to ever be Queen of England twice.

I look back at my crows. They nibble contentedly away on their breadcrumbs and seeds, blissfully unaware—or perhaps all too aware—that they’ve committed treason. Twice.

I guess they don’t call it a murder of crows for nothing.

Thanks for reading. Hope to see you around soon.

One thought on “A Crime Most Fowl”

Just follow this link here! Still hammering out this function.